I don’t really remember the feeling I felt when Mr. M and I sponsored our first two children back in 2009. We sponsored a Roy, a young boy from Lebanon with the most vibrant blue eyes and Emelisa, a girl from Albania whose favorite subject was French. After Miss C was born I felt that it would be a good idea to sponsor, Adriana, a child her same age to help her learn about privilege and social responsibility.  When I met a woman in 2014 who talked about her sponsored children in such intimate detail, when I knew so little about the girls we sponsored, I felt ashamed and endevored to get to applologize for my inattentiveness and strive to get to know them better. In 2015, when Emelisa referred to us as her second parents, I felt humbled. When, after 5 years of sponsorship, I received a picture of Ariana smiling, I felt joy. When Alice, who we sponsor in Burundi, told me that the entire village gathers together to hear the social worker read the letters I send her, I felt shocked and inadequate in writing letters worthy an audience.

With all the feelings I’ve felt about sponsorship, I’d been curious about how it felt to be sponsored. While visiting a small, rural medical clinic surrounded by what felt like vacant space as far as the eye could see, I asked this question of mothers, who now grown are World Vision volunteers. They told me it made them feel happy to be sponsored, that someone who didn’t even know them would care enough to help them. They felt proud to have been chosen. They told me that they felt a desire to try harder. 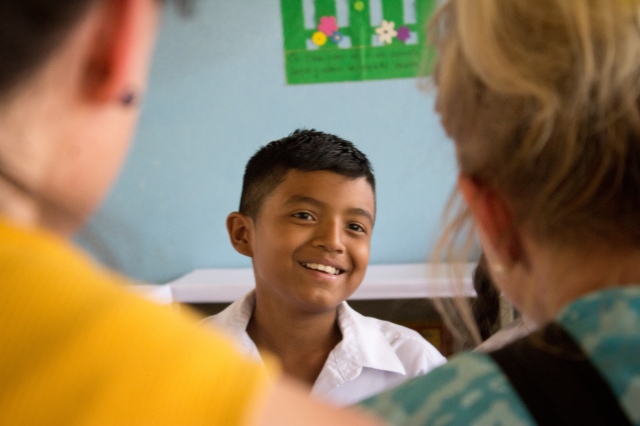 We met with a teacher in a rural school who shared that having been sponsored as a child help him to gain confidence and fueled him to try to help others achieve their dreams. He spoke to us wearing a broad smile on his face and a small child on his hip. His evident care for the young boy led us all to believe him to be the boy’s father, but after further discussion we learned that he was a caring teacher, looking after a young student whose parents hadn’t yet arrived to take him home.

We met a civil engineer who, along with his sister, had been sponsored by a woman from New Zealand. She wrote to tell them that she felt that the best way to help the siblings have a better future was to fund the older brother’s college education so that he could get a job that would support them both. Now, he puts his skills to work as a World Vision staff member, helping to build a brighter future for all children in Nicaragua.

We met mothers who felt grateful that someone would be willing to invest in their child’s future. One felt thankful that she were able to give her children clean water to drink, that there was a stable roof over the one room home and that there was a stable latrine behind the home. Another felt happy for the education World Vision had done around breast feeding that had led to much healthier children in the area.

After personally meeting Valeria, the little girl we sponsor in Nicaragua, I felt grief at bidding her farewell. We both had tears in our eyes and quivering lips as I told her through out translator that I felt so very proud to be her friend. I also felt so very thankful for the opportunity to have gained such an up close look at the hope and possibility that World Vision weaves through all their projects. I know that Nicaragua has a brighter future as a result of ordinary people making the choice to share about $1 a day with someone they may never meet, may never hug, may never speak to face-to-face. BUT, I also know that child and that child’s mother will feel the love in that simple act and it may just be the spark that ignites something really big in that child’s life. I invite you to experience the feeling of changing a life today: cause.worldvision.org/salina If there’s one thing I’ve learned – doing something to try to make a difference sure feels a lot better than doing nothing.